Open to the Public was an action research project by German and Dutch artists Katja van Driel and Wouter Osterholt, which explored the potential of empty buildings to create new types of access to the city. During autumn 2012, the artists spent time mapping the many underused and vacant properties in Preston city centre. The following January, they invited members of the public to view their findings, which were presented in an empty shop unit in the Guild Hall shopping arcade, and to share their own opinions and ideas about the future of the city. The artists also hosted public discussions with community activists and local authority officers, including Preston City Council’s head of property management, about the causes, effects and possible uses of Preston’s empty buildings.

‘For years, Preston has been preparing for the ambitious Tithebarn Scheme, which was eventually abandoned in 2011. Yet, rather than a failure, this represents a chance to think about an alternative future scenario for the city, which examines what can be done when the dominant market logic no longer functions, and makes use of existing resources. The struggle for space is an important political conflict, which exposes power relations. Empty spaces provide an opportunity to talk about ideas for the city, as well as to open up places which can be shaped by different communities to produce a new type of ‘urban commons’ Katja van Driel and Wouter Osterholt. 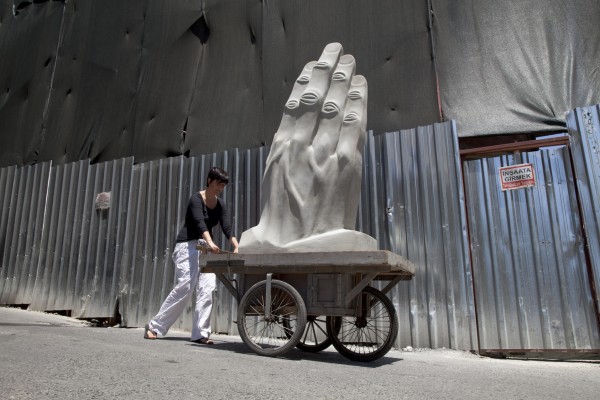 Open to the Public