Outward journeys must not be in the past was a series of signs and posters, installed in Preston’s transport hubs, which examined the city’s significant relationship with modernist transport information design from the late 1950s to late 1960s. The artworks reflect Tenneson’s fascination with the prevalence of modernist signage in the city, such as the original Swiss influenced signs in the bus station; the railway station’s still-prevalent British Rail corporate identity signs; and the standardised motorway signage originally developed by Jock Kinneir and Margaret Calvert for the M6 Preston By-pass – the first motorway in the UK. Named after an error message on the National Rail website, the project emphasised the conflicting styles and messages which have developed in the city over time, and explored the role of typography within everyday urban experiences.

The project was launched alongside Steph Fletcher’s work twentyfourzero in April 2015, and included a typography tour of Preston led by Tenneson. The posters were displayed in Preston’s railway and train station over a four week period and smaller, limited-edition versions were available to purchase. It was also accompanied by a zine entitled ‘Time Travel’ developed with Fletcher.

Image credits:
‘Outward journies must not be in the past’ by Chester Tenneson, 2015, photo by Bernie Blackburn. 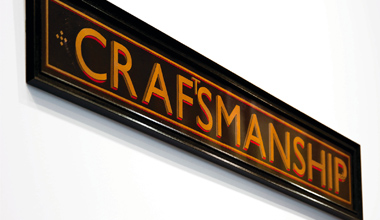 Outward journeys must not be in the past